A Monday evening in Copenhagen. I – a West German – am sharing my dinner table with 3 Ossis. We are all pretty much the same age and we have one thing in common: We all live in Denmark.

The way we grew up though differs tremendously. Talking about our childhood and experiences with the DDR I have to admit – I feel excluded. I have not watched Pitiplatsch on East German TV when I was a child, I did not line up to buy bananas, and when I wanted to eat melon I just asked my mum if she could bring one from the supermarket. Chocolate or vanilla milk we got in the school breaks, and I have never demonstrated for my right of freedom.

Some of my friends have. Christian´s mum took him to the famous Monday demonstrations in his home town. For him it was a cool lantern procession and it was great fun. He did not understand the impact it had on his country´s future. He was 11.

Shortly after – exactly today 25 years ago – the wall was gone. People could go where they wanted. None of their families immediately took their kids and visited the unknown West. All three of them agree. “You didn´t know if they would close the border again. It was too risky. We waited to see what would happen.” 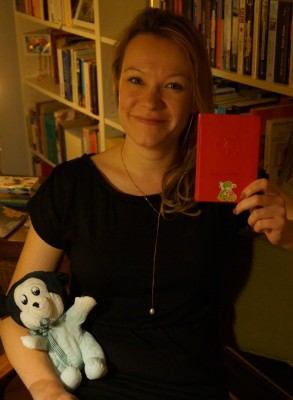 After a while they went to the West to experience how it looks like on the other side.Every DDR citizen received 100 German mark (around 50 Euros)– the so called Begrüssungseld. Caroline still has what she was allowed to buy from her money. She decided to go for a blue Mickey mouse. She took it with her when she moved to Denmark.

Christian remembers that on the way to the West you still had to get your passport stamped. As a DDR citizen you were used to lining up. So they lined up at the one border control booth where everybody was standing and waiting. It took a while until they realized that there were more border control houses accessible.

Lining up was a natural thing in the DDR. A lack of resources led to people buying tons of shampoo when it was available. You never knew when you would have a chance to get it again. You might have even changed clothes and lined up again to receive another ration. Suddenly lining up was not necessary anymore. Easy to get used to when you are 10 years old – but what a difference for those who grew up in the DDR and suddenly had to integrate into a system that worked quite differently.

All the things you believed in being right for 40 years – or at least the way you did things – was now suddenly wrong. Political education in the DDR school was quite different than in West Germany. Additionally, the teachers who had told about the advantages of socialism and West Germany being the enemy were from one day to the other supposed to teach the great advantages of capitalism. Russian lessons were replaced by English lessons. Everything was different.

The first euphoria of a reunited Germany turned very fast into the West taking over the East. “Robber-knights” from the West went to buy pretty much every property available in East Germany for almost nothing. Still nowadays people suffer from this “take over”.

People you had been friends with turned sometimes out to have worked for the Stasi – spying on you. Do people want to know? What does it do to your level of trust when you suddenly find out that your best friend told all your secrets to the Stasi. Many decided not to take a look into their Stasi file.

A university career, family in the West, being active in the church. All reasons for being a suspect – and therefore people were spied on.

Caroline remembers times where the kids were sent out of the room because secret things were discussed. You always had to be careful what to share – even your husband or wife could have been working for the Stasi or your kids could have accidentally revealed something in school.

Were all Stasi employees bad people? Probably not. Some of them just wanted to work in a profession they were truly interested in – and the price was to work for the Stasi. Did they report everything or did they just report harmless things? Who knows. And nobody really wants to talk about it anymore.

“Life goes on and you just have to make the best out of it.” “Be happy for what you have.” Sentences we have probably all heard from our grandparents. It has a different meaning though for those who lived under restrictions and those who remember the times when your career path was dependent on your parents’ willingness to join the party.

Still today people are very suspicious and careful what to share with others. A result from many years living in this system?

What would my 3 friends have done, if the wall would not have come down?

Caroline, Martina, and Christian are grateful and happy for what has happened to their lives due to this historic event.

We can all go anywhere we want to in the world and all four of us could take the decision to move to Denmark. 3 of us at this table could not have done that 25 years ago.

Thanks guys for sharing your stories! 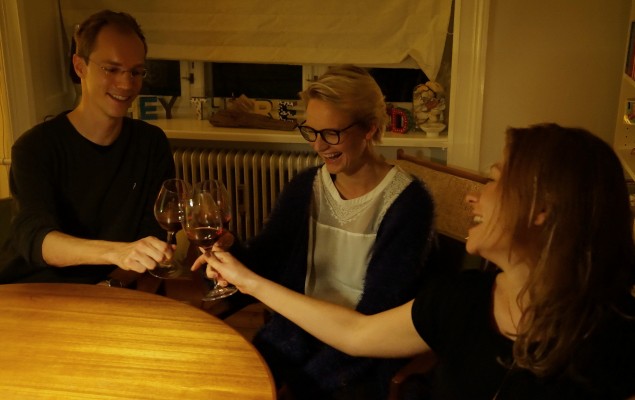 Did you know about all of this? What are your stories you remember from the DDR or East and West?

If you are interested in more stories about the German reunification, have a look at Doreen’s and Katja’s stories.