2
HEY THERE WORLD
November 2, 2014
Close-up of the month, Germany, Greetings to home

Living abroad, traveling, and having foreign friends gives you a great insight into other cultures. True.

But it also gives you a great insight into your own culture and into yourself – Why do you do the things you do in the way you do them.

Every week on Sunday I would like to introduce people to you who are or have gone through this experience and therefore maybe have a changed perspective on their own culture.

This week Kathrin from Hey there world would like to send some greetings to home.

Yep – it is me. I thought this was a great opportunity to share my point of view and for you to get to know me a bit better. At the end of the day, I am your host on Hey there world and I think it will improve our relationship if I tell you more about my frame of mind.

As you could already find out in the About section I am German, I am from Nuremberg to be precise but I have lived in different cities within Germany and several other countries during the last decade or so. I have also visited over 40 countries and on these journeys I have definitely not only learned a lot about different cultures but also my perception of myself as well as my perception of Germany has changed.

Working for many years with colleagues from around the world taught me a lot about how I as an individual am automatically put into the “German box” and that I actually do the same. Isn´t life much easier that way? It gives you a great point of reference. Unfortunately we forget that way that even if somebody comes from Brazil, the culture differs a lot from north to south – just like in Germany and everywhere else.

So here comes my perspective on Germany:

How would you start your greetings to Germany? 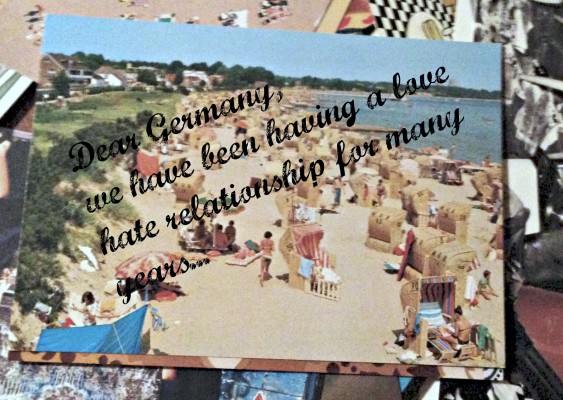 We have been having a love hate relationship for very many years. …..

What comes to your mind when you think about Germany?

G – generosity (not so obviously – but behind the scenes)

Y – yes we can spirit

In what way has your perception of Germany and the Germans changed due to your experience?

My perception of Germany and us Germans has changed a lot over the years also due to different experiences in very different cultures.

When I moved to Canada I had just turned 20 and all my life was ahead of me – freedom and excitement. Back then I really felt that Germans were rude, closed-minded and just so not open to things that are not done “the German way”.

I hated having to go back home after a year. I loved everything about Canada and the people seemed to me just so open-minded, in peace with themselves and the space you have in Canada just gave me the mental space I needed and was looking for.

I guess you can imagine the dramas when I got back. Some of my friends probably still remember me after my return: approaching random people in bars just for a chat. Nothing more, nothing less. Very strange for Germans in the 90s – at least in Frankonia – the part of Germany where I come from.

I then moved to Spain and I suddenly felt annoyed about the manana mentality – this laid-back-ness that I had previously loved about Canada. Everything took forever – even buying stamps might take several hours including listening half an hour to the chat between the sales person and the customer in front of me. I strangely enough appreciated German efficiency for the first time.

New Zealand, my next “home for a while”, made me become aware of the fact that it is quite difficult to get into the heart and life of Germans – but when you are in, you are in. I love easily chatting to and meeting random people, the New Zealand way. But most of those relationships remained on the surface and I missed extending them … making “real” friends.

And now I live in Denmark with THE Danish boyfriend and I feel that I underestimated the German level of socializing – in comparison to the local standards, I perceive us Germans more polite, inviting, curious and service minded than I ever thought we are. I always thought it cannot be more difficult to get into people´s hearts than in southern Germany – but I would now after four years in Denmark say, that more difficult is possible.

So how has my perception of Germany and the Germans changed? – I guess I realized that we are not as un-open and boring as I thought we were and I’ve come to appreciate several aspects of German-ness because I really missed them in other cultures/countries.

What are the most important lessons you have learned about the German culture?

We are not easy to conquer because we are fairly suspicious of too much friendliness, easygoing and open-mindedness. If you have conquered us, however, we are your life-long friends and stick to our word. Reliability is really important for Germans.

We are efficient. And in work relations we like our partners also to be efficient and not to destroy or manipulate our plans.

We like to hear your opinion – expressed as directly as possible. No chichi. No understatement. Straightforward is good for us. We would like to come to a common agreement, but at the end of the day the one who is responsible takes the final decision, if an agreement is not possible.

Don´t babble – say what the problem is and then we can fix it together. No worries – we won´t immediately perceive an argument as a conflict. We just exchange different opinions.

We love soccer and it is quite obvious who is the best team in the world – right?!

And we like to celebrate – there is always a reason for a good party. And if there is not an obvious one don´t worry, we´ll find one.

Politeness brings you further. Some cultures might think that we follow orders. I think we just don´t have a problem doing something for somebody if we are approached in a polite way.

And last but not least – we like looking at each other in public. Some call it flirting. I call it eye-interaction without a purpose.

What do you think Germans should be aware of?

It could be helpful, if Germans would be more aware of the fact that they sometimes come across as harsh, rude and too straightforward – some cultures might even feel slightly intimidated by us.

When doing business with other cultures I think it is helpful to find a common new way instead of insisting on familiar methods. Quite often there is also a successful way of doing things that might differ from “The German way”.

Which stereotype can you totally relate to?

Straightforwardness. I really think Germans are straightforward, outspoken, blunt – up to the point where it sometimes even hurts … and in case you wonder if we intend to be rude – we don’t. We just don´t notice that anybody might have a problem with it.

What is the best kept German secret?

That we actually do have a good sense of humor.

I have so many. But for now I would pick Wahnsinn.

It can mean a lot of things. Ranging from expressing positive excitement like “Wahnsinn that I meet you here”. To showing your annoyance about something. “It is Wahnsinn, that the Deutsche Bahn is on strike again.” (I wonder why this is the first thing that comes to my mind….?!)

Basically it means unbelievable. It also means insanity and madness.

Which sentence will give others access to Germans´ hearts?

Darf ich Dich auf ein Bier einladen? – May I invite you for a beer? We like to socialize, we are just not so good in initiating it with people we don´t know.

Most embarrassing moment of being German?

Oh wait, I have another one. Germans (again mainly tourists) – believing that nobody understands German – complaining about EVERYTHING, be it food or service, the weather or the (un-)tidiness of the holiday destination (again, we like to find the things that are not working …. but you can be assured that we would have a solution ready. In case you would like to hear it, just speak up!).

What would you appreciate not to hear about Germany or the Germans?

I have a few things here – So:

1. That Germans follow orders without thinking. (Have not met more of those people in Germany than anywhere else.)

2. That we all walk around in Dirndl and Lederhosn.

3. That Hansi Hinterseer is German … he is AUSTRIAN!

Well and then this one: People telling me about the horrible things happening in Hitler Germany. Don´t get me wrong – I totally agree that it was horrible. I truly believe though that Germany really is dealing with its past and has been doing so for decades. It was horrible, atrocious and unbelievably cruel – but it was a long time ago and things have changed a lot in Germany. Hitler Germany does not exist anymore. The eye-witness generation is dying out. Even my parents are too young to be born during Hitler Germany but my whole generation is still feeling guilty for what happened and is trying to make up for our past. It’s exhausting and still has an impact on us and our self-conception of being German.

You can’t change the past, unfortunately. Sharing what we all can do so that things like this never happen again would be wonderful – so let´s talk about this instead.

Best things you have learned about yourself when being outside of your cultural comfort zone?

I have learned that a network is really important for me and my personal comfort zone, and that I have a strong need to “become part” of the culture I live in.

I don´t like to be perceived as a foreigner and I don´t like to constantly be obviously sticking out – not blending in with the crowd can be quite tiring … and sometimes it is nice to just blend in and chill.

I like to create my own home in different places but in order to do so I need to feel that the culture I live in is welcoming me to do that.

I have learned that being curious and interested in most cases opens doors to people´s hearts and homes and I am still surprised about all the good things and all the support from random people I have experienced in different situations all around the world. And I really am grateful for that.

Greetings to Germany – your last words: 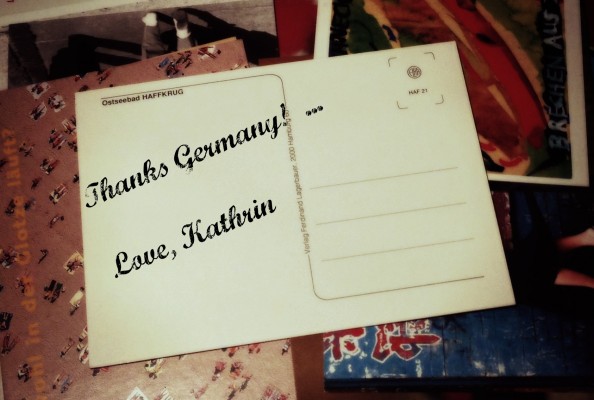 Thanks Germany! .. For allowing me to be me, for being there for me when I needed you, and for always giving me
comfort.

After all, you are not so bad!

Thanks to myself for sharing my perspective of the German culture and my experience.

Can you relate to what I am writing? Let me know, what you think.

Next week the interview will be connected to the fall of the wall. It is its 25th anniversary – time to look back.